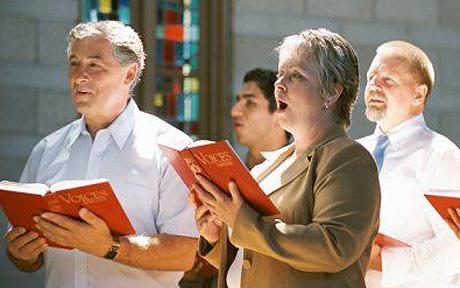 THE CHURCH of England and the Royal School of Church Music (RSCM) said they will for await updated guidance on singing in places of worship after findings of a Government-backed study found that singing might not present a Covid risk.

The research, which could lead to a return to congregational singing, found that at the quietest volume neither singing or speaking were significantly different to breathing.

The report explains that restrictions on singing in churches has arisen from a perception that there is a significantly higher risk of aerosol production from singing than speaking, based upon high-profile examples of clusters of Covid-19 following choral rehearsals.

The research project, known as “PERFORM”, was intended to measure aerosol production from humans.However, it points out that no direct comparison of aerosol generation from singing and speaking has been reported.

It measured singing, speaking and breathing in a zero-background environment which linked aerosol production to specific vocalisations.

Researchers reported a steep rise in aerosol mass with increase in the loudness of the singing and speaking, rising by as much as a factor of between 20 and 30. However, it was also found that singing does not produce substantially more aerosol than speaking at a similar volume.

It says that guidelines should create recommendations based on the volume and duration of the vocalisation, the number of participants and the environment in which the activity occurs, rather than the type of vocalisation, and that mitigations such as the use of amplification and increased attention to ventilation should be employed where practicable.

The RSCM’s Director, Hugh Morris said: “We welcome this news, and are thankful for the enormous effort on the part of all those involved with the research, who have made it possible to release the results in such a short time-frame.

“Singing is of such importance in worship, and this is a really encouraging step towards its safe resumption.

“It is of course vital that all choirs and singing groups follow the relevant government advice, and so we look forward to receiving the latest guidance in this important area.”

Since last week, it has been permissible for choirs to resume singing with appropriate distancing, although congregational singing is not yet allowed.