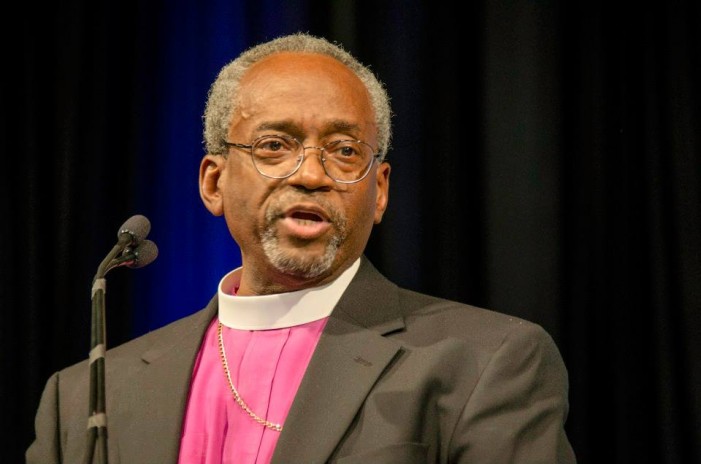 THE AMERICAN Primate has joined a court case in support of the right of same-sex couples.

Presiding Bishop Michael Curry has joined other denominational leaders in signing a ‘friend of the court brief’ in the case before the country’s Supreme Court.

It centres on a Catholic welfare agency in Philadelphia, which administers the city’s foster care programme. The agency is refusing to licence same-sex couples as foster parents, in violation of Philadelphia’s laws. However, the agency is claiming justification that freedom of religion exempts it from the law.

Primate Michael Curry has signalled his support for same-sex couples by his action, while affirming the commitment of The Episcopal Church to ‘both equal protection of the law for LGBTQ persons and appropriate protections for religious liberty’.

Bishop Curry joined the brief filed by the Baptist Joint Committee for Religious Liberty that also includes the United Church of Christ and the Evangelical Lutheran Church in America. Their brief argues that the City’s policy forbidding government contractors from discriminating against same-sex couples wishing to serve as foster parents does not infringe upon the First Amendment’s guarantee of religious liberty.

They argue that such ‘non-discrimination policies in fact enhance religious liberty by protecting against unequal treatment of foster parents on the basis of their religious beliefs’.

“The American experiment contemplates that individuals may not only coexist peacefully in spite of their differences, but may participate in society with equal dignity,” reads the brief signed by Curry.

It says that ‘governments, religious organisations, and the people have long benefitted from … governmental partnerships with religiously affiliated charitable groups’.

“Indeed, partnerships between the government and faith-based groups playing a role in social services is a strength of this country’s pluralistic tradition.At the same time, no organisation—religious or secular—is entitled to veto the government’s choices on how a public programme is to be run.”

The brief was signed by nearly 430 interfaith leaders from across the United States, including 35 Episcopalians.

The Rev Gay Clark Jennings, president of the Episcopal Church’s House of Deputies, who also signed the brief, commented: “As Episcopalians, we believe in the equality of LGBTQ families because of our faith, not in spite of it.”

“It is a false choice to suggest that we must choose either religious freedom or solidarity with our LGBTQ siblings in Christ.”

“Any suggestion that ‘religion’ or ‘people of faith’ as a whole reject LGBT equality is false and insulting to millions of Americans of faith,” reads the brief. “And, given the broad and growing religious support for LGBT equality, any claim that enforcing anti-discrimination provisions in government contracts will discourage faith-based organisations from providing social services is, at the very least, vastly overstated.”

However the agencies claim that their right to the free exercise of religion allows them to refuse to license same-sex couples as foster parents under the terms of a taxpayer-funded contract.

The court is scheduled to hear arguments in the case on November 4. A decision is expected by June 2021.