A new history of the English church 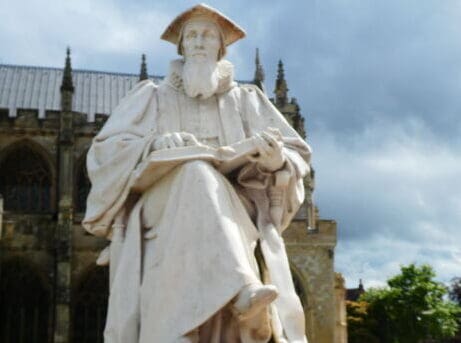 Writing a history of the English Church from earliest times(200AD) until the outbreak of the pandemic last year was a project which gave pause for thought. I did it for three reasons.

Firstly, it had not been done for at least forty years. As an ordinand I read a book by the Bishop of Ripon, J.R.H Moorman, entitled A History of the Church in England   first published in 1963 and ending in the post WWII era. And, a little more recently David Edwards, one-time Provost of Southwark Cathedral, had published a three-volume work entitled Christian England in 1984. His work ended with WW1. So, it seemed that it was time for a new work bringing the church’s story (by which I mean all denominations and none) up to date; and at the same time extending its remit. Like them, I kept it to the English Church, not thinking myself competent to include and write about the varied histories of the Welsh, Scottish and Irish Churches too.

The second reason was that in recent years there has been a great deal of interest in what it means to be English, connected of course with the political question of the destiny of England in or outside the EU. Much ink has been spilt on the meaning of being English, by the likes of Jeremy Paxman The English or the historian Robert Tombs The English and Their History, Andrew Marr, The Making of Modern Britain and A.N.Wilson’s Our Times . Given this upsurge of interest in being English I thought it timely to re-state the thesis that you cannot understand our history, our nation without understanding the profound influence of the church and of Christianity on it, and, to be more explicit, the teaching and life of Jesus.

Indeed, it was a monk, the Venerable Bede, who first gave the name English to the Saxon kingdoms. And over time, Vikings, Norman French, the Huguenots, the Irish and Jews would be added to the mix before 20thcentury immigration got going: while the Celts would be pushed to the West (Wales), and South West of Scotland marching with the Picts. And even now, as a nation goes to the polls (on so called Super Thursday), we can see the delineation of these ethnic groupings today.  But to understand the English you must understand the history of the church in this nation:  the illumination and coherence it brought to a group of warring Saxon kingdoms; as well its struggles, its sins, its failures, its aspirations and its deep divergences which can be very hard to understand. In all this we have recently been vividly helped by Tom Holland’s Dominion which demonstrates, from a shrewd and sympathetic observer, the profound and seemingly permanent shaping of our national life by Jesus of Nazareth.

The third reason for writing is that, as an historian of some academic training, I have been around the subject for fifty years since degrees in history and theology from Oxford and Durham- reading up since then some four hundred titles on English history whilst working for forty years as a stipendiary clergyman in suburban, urban, rural and Urban Priority parishes. The churches I have served in have been, in origin,Norman,medieval (13th century), Tudor, Victorian and one rebuilt in the 20thCentury. I have often stood in front of boards recording the names of vicars going back to say 1250, and said to myself “what was life and ministry like for you” in the days, say, of Henry III, Simon de Montford – a bit before the worst ever Pandemic, the Black Death, when no available vaccine could save a third of England’s population.And having written three books on the early Church from the Apostles to Chalcedon, including one on the Cappadocians who have so much to teach us still today, I thought it was time to tell again the extraordinary story of the church in England. By all the churches I mean, among others, Roman Catholic,Orthodox,Methodist, Baptist, Independent,Quaker, Pentecostal and New Churches like the Vineyard and New Frontiers.  In recounting this story of the English Church, I have always put it in its political, cultural and philosophical context: because the shaping of the churches in England was often political (ie shaped by those with power) and the church is always, and should be, in permanent interaction with the nation.

There is so much to tell about this narrative. I have told it rather succinctly in 600 pages with lots of back information on my website including a full bibliography, a who’s who of the most influential 120 Christians, in my estimation,in English Christianity (I will  have missed out your favourite!), a glossary of terms and gallery of pictures. Have a look at it at www. patrickwhitworth.con.

The experience of the pandemic links us directly to the 14th Century and the Black Death. The Black Death first emerged in Weymouth in June 1348 and tore through the country for the next two years killing up to a third of the population, including two archbishops and halving the size of London to c 50,000.  But it was also a time of spiritual struggle, renewal and progress. In the late fourteenth century a group of people called the English Mystics, who wrote mostly on prayer, arose.Among them were Richard Rolle who lived as a hermit in Yorkshire recounting his experiences of prayer in his work The Fire of Love as well as translating sections of hr New Testament into English.

Later Walter Hilton wrote his work on spiritual progress called Ladder of Perfection and in Norwich, at a similar time (c1342-1416), Julian of Norwich wrote her Revelations of Divine Love recounting her experiences of God’s love in a period of sickness and its significance to her: “Know well that love was what he (God) meant”. Likewise, Margery Kemp, the pilgrim from Kings Lynn, was often overwhelmed with tears at the Lord’s love for her and others.  While this renewal of devotional life written down in English for the first time was going on, elsewhere Wyclif (c 1320-1384) and the Lollards were calling for a reform of church life. Among their demands was for the scriptures to be written in English, preaching to take priority over the mass and the church to be divested of worldly wealth and power.  Wyclif barely escaped with his life, his body was exhumed from its grave, burnt and the ashes scattered on the local river in Lutterworth.  The late 14thcentury was a period of deep pain, loss, confusion and death; but also, one in which many knew God’s love in prayer, and the seeds of reform were sown in costly and clear-eyed discipleship.

Moving swiftly to the 19th &20th century and to a very different England, I notice it was Christian lay people of singular conviction and calling who helped transform English life. William Wilberforce had pioneered the way with his twenty-year parliamentary campaign to end the Slave Trade, bearingfruit in 1807.  He died in 1833 just as slavery itself was outlawed in British dominions. Others were to follow his example. Elizabeth Fry sought to bring about Prison Reform.  Florence Nightingale laid the foundations of the profession of nursing. Josephine Butler campaigned for the proper treatment of women with sexual diseases and legislated for a statutory age of consent of 16, and campaigned against the trafficking of girls.

Lord Shaftsbury enabled several Acts of Parliament restricting the use of children in factories, mines and as chimney sweeps. In the 20thCentury Sue Ryder of Warsaw brought relief to war-stricken Poland and Cicely Saunders pioneered the use of hospices and palliative care throughout the country. These are striking examples of visionary people who changed our national life for the better, bringing hope and liberation. It reminded me that church communities and clergy are to equip others to fulfil their vocations, not to pile up the salt in the salt cellar.

And finally, I notice that it is dangerous to lead. Five archbishops lost their lives. Alphege, first a hermit from my old parish outside Bath, was captured by the Vikings when Archbishop of Canterbury.   He refused to be ransomed thinking it to be a waste of money and was battered death with an ox’s jaw during a drunken Viking feast in 1012.  Becket was murdered in his cathedral and remembered now in an exhibition in the British Museum.  Archbishop Sudbury was executed by the rebels in the Peasants Revolt in 1381.  Cranmer was burnt in Oxford after recanting some of his attacks on the Papacy which he later dramatically retracted in his pre- burning “worship service” at the University Church in 1556. And Laud, hated by the Puritans for his imposition of ceremony on the church using the courts was executed in 1645.

We do well to learn from the past, and draw inspiration for the present. And Did Those Feet is a small step in that direction.

Patrick Whitworth is author of several books on church history, and chair of Soma UK.
patrickwhitworth.co.uk

And Did Those Feet: The Story and Character of the English Church AD 200-2020 by Patrick Whitworth is available via sacristy.co.uk 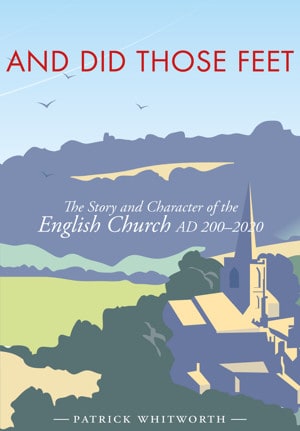