All shall be well: the challenge of Dame Julian today 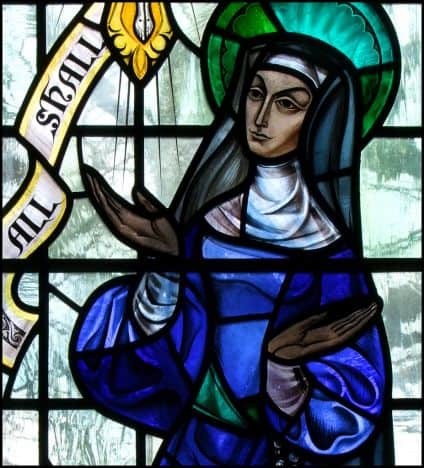 I am writing this on the day the Church of England remembers Dame Julian of Norwich. She was an anchoress, literally a rule-breaker, though the rules she broke in her fourteenth century cell may have had more to do with breaking the social convention of living in community. An anchoress was someone who withdrew from the rest of society to live a life of prayer, the extremity of this chosen way of life lying in the literal way they were cut off from the world and walled up in their cell. They still had contact with the outside world, however, for people recognised the value of having someone who could give spiritual advice.

She has become known as the patron saint of the pandemic not only because she lived at a time of plague herself – the Black Death in the fourteenth century carried off a third of the population of Europe, but also because she knew about living in isolation. Many Christians have been encouraged by the way she kept company with Jesus in her isolation and discovered that he transformed her situation into a deep communion with himself through love. Julian had a series of visions or ‘shewings’ which she meditated on for the rest of her life and wrote about in her book Revelations of divine love, the first book known to be written in English by a woman. Julian drew on the natural world to explain how God loves and cares for the world and she emphasised God’s compassion at a time when many were so full of fear, not least that God was punishing the world with plague, famine, war and so much suffering.

She wrote with confidence that ‘All shall be well.’ This phrase, which is often repeated, has had me thinking recently. Julian wrote to her contemporaries who took for granted that God existed and was all-powerful. They may have felt he was distant and fearsome, but they believed firmly in heaven and hell and that the Church was there to keep them from ending up at the wrong destination. Today, we can no longer assume anyone believes in God, let alone that he is passionate in his love for the world. To say ‘All shall be well’ in this context could sound like bold (or even blind) optimism. It needs to be set within the Christian story that God so loved the world that he gave his only son…….

In the past year, the world, has grasped at many straws that speak of hope: vaccines, falling death rates, scientific pronouncements and so on. For many it has been very hard to hang on to hope of any kind. Even those of us who love Jesus Christians may have felt their confidence that in God ‘all shall be well’ faltering at times. When everything around us seems to beg to differ, it is harder to believe. Julian wrote out of personal experience of suffering and she knew that her loving Lord had suffered too. She wanted to be identified with him in his suffering and speak from that place. How does this woman challenge us in our churches today?