The Gospel According to a Sitcom Writer 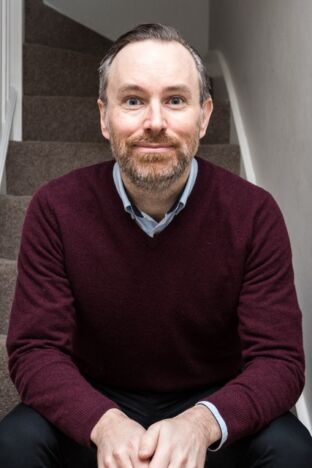 I’m a comedy writer for the BBC, having written for sitcoms on BBC1 (Miranda, My Family) and created sitcoms for BBC Radio 4 (Hut 33, Think the Unthinkable), so I spend quite a lot of time thinking about jokes.

There are three things we often say in my line of work. The first is this formula:

Something that wasn’t funny at the time, especially for the people involved, is often comic with hindsight. In the moment, someone might dare to say “You’ll laugh about this one day” but they will most likely receive hard stares for their sunny disposition.

A joke can be ‘too soon’. I’ve walked that tightrope with a BBC3 show I co-created called Bluestone 42. It was set in Afghanistan a few years ago and is, to my knowledge, the only sitcom set in an active on-going war (with the possible exception of Tommy Handley’s It’s That Man Again on BBC Radio during World War Two. And don’t forget M*A*S*H was broadcast during the Vietnam War but cunningly set during the Korean War).

The subject matter of Bluestone 42had to be handled with extreme care. For some, the events were too raw and too traumatic, having been personally affected by the conflicts. Others, including many involved in the conflict and some who were bereaved, found the sitcom cathartic and funny. It’s hard to predict how people are going to react. I looked at this in my previous book, The Sacred Art of Joking, in which I explain how jokes work, and how they go wrong, especially in the realm of religion.

You’re probably much safer looking back to the events of the Bible, which I like to do, being an evangelical Christian.The suffering inflicted on Job is so long ago and so tragic that it is comic. Read Chapter 1 of Job and you will find a catastrophic confluence of tragedy that tips over into comedy. You have servants almost backed up, getting in each other’s way, waiting to announce another utter tragedy that has befallen Job and his family. His friends then sit around sitcom-style discussing their friend’s problems, like Joey, Ross and Phoebe in Central Perk. Meanwhile his wife recommends that her husband curse God and die. Thanks, love.

So if tragedy plus comedy equals time, such huge tragedy so long ago makes the first few chapters of Job hilarious. But that’s the sitcom-writer in metalking. In my new book, The Gospel According to a Sitcom Writer, I don’t argue that the gospels are basically sitcoms. I don’t want to be one of those people with a hammer looking around and only seeing nails. But the stories we are presented with in scripture are often surprising, strange and full of dramatic irony, even if the characters themselves are not amused.

Recently, I read the story of Joseph in prison, interpreting the dreams of the Pharaoh’s cupbearer and baker in Genesis 40. Joseph is delighted to inform the cupbearer that he will be restored to high office. You can imagine the baker grinning and saying to Joseph, ‘Ooh, ooh, ooh, what about me? Do me! Do me!’ Joseph then tells him he’s going to be hanged and left on a tree. That’s a funny moment, if you’re anyone except the baker. It must have been rather embarrassing for Joseph and the cupbearer.Characters within the story rarely find events funny, or are shown to laugh. Such passages are unusual, like Sarah laughing at God’s promise of a child.

The verse that seems to be missing from the Bible is the one that says ‘Jesus laughed.’ There is no such verse, and there’s very little Christian art that depicts Jesus doing such a thing. Depending on your theology, churchmanship and personality, you might have no problem imagining Jesus being angry with the moneychangers, or tender with the woman caught in adultery. But you might find it hard to picture Jesus throwing back his head and roaring with laughter. Why is that?

Then again, it’s bad form to laugh at your own jokes. And Jesus said and did plenty of funny things. This is the topic of The Gospel According To A Sitcom Writer, in which I try to obey another often quoted saying within the comedy writing world:

If you’re writing a sitcom, don’t have your characters talk about how funny it would be if something happened. This is a mistake rookie sitcom writers make all the time. The first ten pages of the script are just characters standing around on someone’s first day at work, saying funny things to each other. This is poor writing – and we don’t see anything like that in the gospels. So I tell writers to make stuff happen.

Jesus certainly made things happen. We should embrace how comic these events must have been at the time and afterwards. The Ascension is odd. Sure, we can theologically explain it, harking back to Elijah’s ascent into heaven, setting up the outpouring of the Spirit on the disciples, as Elisha requested a double portion of the Spirit. But wouldn’t you have thought it a very weird thing to witness? Don’t you think they would have thought that at the time?I feel sorry for them as the two men in white chide them for standing around gawping into the sky.

Likewise, the transfiguration, the resurrection of Lazarus and all kinds of miracles we find in the gospel accounts are odd, to say nothing of Phillip’s truly bizarre encounter with the Ethiopian eunuch in Acts. As I say at the beginning of my Sacred Art of Joking YouTube video series, if we don’t find any scripture funny, we’re not taking it seriously.

There is a third rule in comedy about the state in which you should leave the audience, but I don’t have time to go into that. Maybe you can guess what it is?