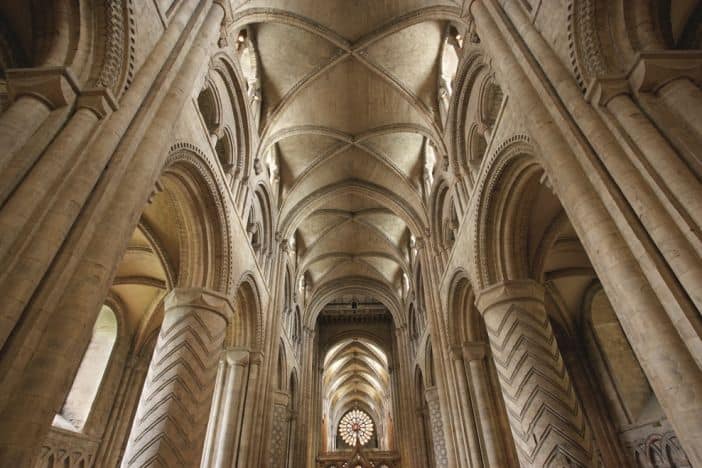 There has been a massive fall in midweek average attendance in Cathedrals of over 70 per cent in 2020. Large international cathedrals have experienced the largest fall, reflecting the fact that they typically attract more visitors than any other cathedral type.

Midweek average attendance in Cathedrals in 2020 fell to 84 adults and 25 children in 2020, according to new research.

A new report has highlighted the positive economic and social impact England’s cathedrals have on the cities and communities they serve and the effect the pandemic has had on their contribution.

In 2019, England’s 42 Anglican cathedrals contributed £235m to their local economies. They provided 6,065 jobs full time equivalent jobs and volunteering posts for 15,400 people who gave 906,000 hours of their time. They welcomed more than 14.6 million visits, 308,000 by schoolchildren for educational events, and 9.5m from tourists.

The Economic and Social Impact of Cathedrals in England was produced by independent research consultancy, Ecorys

Ecorys used surveys, and conducted interviews at six case study cathedrals to collect data relating to 2019, and also asked cathedrals to assess the impact of the pandemic in 2020.

Evidence collected on the impact of COVID-19 – which saw Government mandated closures and restrictions on gatherings – reveals visitor numbers slumped by 75 per cent compared to 2019, visitor spend was down proportionately, and over 70 per cent of cathedral staff were furloughed.

The research continues, stating that the fall in visitor numbers has had a significant effect on cathedrals’ income levels, particularly those cathedrals more dependent on the visitor economy.

The report notes the values suggest a large fall in visitor numbers, from an average of 227,000 in 2019 to 65,000 in 2020: a fall of over 70%. Large international cathedrals have experienced the largest fall, reflecting the fact that they typically attract more visitors than any other cathedral type.

It also found a significant fall in cathedrals’ average non-visitor income, driven by a reduction of almost 80% in income generated from the use of cathedral facilities. Closure and restrictions on congregation size also meant fewer people attended services in the cathedral, down from a midweek average of 362 adults and 108 children in 2019, to 84 and 25 respectively in 2020, leading, inevitably, to a drop in congregational giving.

Over 70 percent of cathedrals’ existing social projects stopped due to closures and restrictions. Furthermore, of the cathedrals that stated they had run Sunday schools in 2019, 43% reported not running Sunday schools since the pandemic started.

The report noted that Government regulations meant that all school visits to cathedrals had to cease during the 2020 lockdowns. As a result, many cathedrals furloughed their education staff during these periods. However, the majority of cathedrals were prepared to start welcoming schools as soon as visits were permitted, with fewer than 10% of cathedrals reporting making education staff redundant in 2020.

However, Cathedrals reported that while bookings were still being made for 2020 during the lockdowns, large numbers of schools later cancelled, reflecting a reluctance to travel and a reluctance to miss any more school classes.

Of the visits that went ahead, class sizes were necessarily smaller due to social distancing constraints. The report found that Cathedrals that usually greet international school parties reported that no international bookings had been taken following the first lockdown. In recognition of schools increased reluctance to travel, by the end of 2020 around a third of cathedrals had already began offering or developing online resources specifically for schools, including online tours, talks and activity packs.

Overall, around three quarters of the community projects and initiatives that cathedrals ran or supported by March 2020 had to be discontinued or reduced as a result of COVID-related lockdowns and restrictions, according to the report.

Data collected by the survey shows that the number of events taking place at cathedrals fell significantly in 2020 as the majority of planned events were postponed or cancelled. As noted in the report, these events can provide significant opportunities for revenue generation, with many cathedrals reporting that their inability to hold such events has had a large negative impact on their finances. Cathedrals also reported that private companies cancelled annual national and international corporate events and festivals. In many cases events have not been rescheduled, as the companies involved are unsure of when it will be safe to hold such events.

The Bishop of Bristol, Viv Faull, the Church of England’s lead Bishop for cathedrals and church buildings, said:

“This report comprehensively demonstrates the value and importance of our nation’s cathedrals, not only to those who worship in them but to their whole community.

“While the pre-covid growth in many areas indicated in this report is very encouraging, the report also highlights the significant losses and cutbacks that have been necessary to meet the challenges of the past year.

“Cathedrals are not alone in the challenges faced, however this is a timely reminder of all they offer which justifies the support they have already received, for which we are grateful.

“It is imperative this support continues to help cathedrals to grow back and to develop all they offer to their communities and economies.”