Our salvation is connected to saving the planet 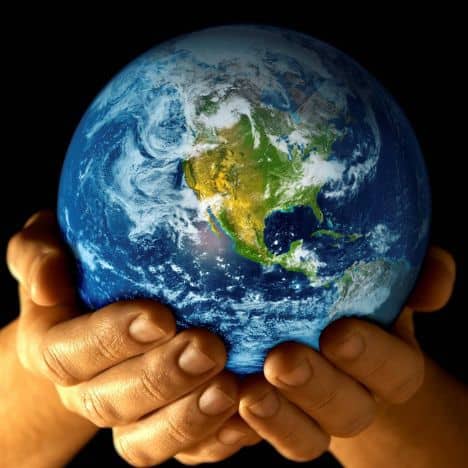 You are not 100% human. In 2016, the Weizmann Institute of Science in Israel discovered that 56% of the cells contained in a human body are not human cells. Instead, they are bacterial. Yes, at least in terms of the number of cells, you are more bacteria than human. You are teeming with other life-forms. The question arises: do we host the bacteria, or do they host us? Indeed, some of the bacteria in your body are so intermeshed with you that they never leave the confines of your membranes. Mitochondria are not technically human, yet without them we could not convert our glucose compounds into energy. They keep us alive.

A different example of intermeshing: the Little Ice Age which lasted from as early as the 13th Century and ended around the late 19th/early 20th Century had a ‘sudden’ spike between 1560 and 1630, peaking around 1610. What caused the unusual occurrence? According to Simon Lewis and Mark Maslin in their book The Human Planet, it was the discovery of America. When Columbus sailed the ocean blue, he brought with him lots of diseases that those in Eurasia had developed an immunity to – but Native Americans hadn’t. The results were horrific. Recent population modelling has estimated that Native American populations dropped from 61 million in 1492 to just 6 million by 1650. These were not nomadic or hunter-gatherer societies. They were complex, agricultural civilizations. But alongside the terrible human tragedy there was also an ecological impact. With the collapse of agricultural societies, the forests reclaimed the land. Unlike in the colder climates of the northern hemisphere (where it takes several centuries for the forests to become truly‘wild’), jungles in tropical climates will fully reclaim land within 50-60 years. As such, in the 16th Century vast tracks of agricultural land in America were soon overtaken by carbon-dioxide guzzling, oxygen-spouting trees. There was a sudden drop in hot carbon dioxide levels in the earth’s atmosphere, with a corresponding spike in cold oxygen levels. Cue advances in the ice, with fayres on the frozen Thames and famines across the whole of the northern hemisphere. The latter was a factor in prompting such events as the Thirty Years War, the collapse of the Ming Dynasty, and the Shimabara rebellion in Japan.

These kinds of findings are drastically revising the old Enlightenment attitude of how humans relate to the natural world. Instead of being utterly separate and apart, we are utterly intermeshed with the world around us. Whereas Descartes’ cogito separated himself from the world to discover his ergo sum, modern humanity finds itself deeply embedded in a vast and sometimes frighteningly interconnected web of life. We are discovering a planet which God has created as precariously but beautifully – and dynamically! – balanced. The bear eats the salmon by the river then deposits nitrogen in its droppings which help the trees grow. The soil is at a perfect temperature for bacteria which makes crops grow – any colder or hotter, the bacteria is dormant or killed (and consequently,no crops). The pesky grain-eating sparrow of China which Mao tried to exterminate in the Great Leap Forward also happened to consume 80% of crop-eating pests. Killing millions of sparrows turned out to be a major cause of the horrific famine of the 50s and 60s in which somewhere between 23 and 55 million people died. It brings a whole new meaning to ‘his eye is on the sparrow’.

This interconnected and intermeshed world should be of no surprise to those who immerse themselves in the Scriptures.The earth is intended for shalom, a place of interconnected and mutualistic flourishing for all God’s creatures. The climax of creation is not humanity, but the Sabbath for all creation.Even though humanity is presented as the princely vice-regent of creation in the opening chapters of Genesis, Adam is nevertheless always presented as a creature alongside other creatures. Created on the same day as the other land animals in Genesis 1, and quite literally made from the earth itself in Genesis 2, Adam’s home is unambiguously this planet. Note how two of the first victims of Adam’s sin are the now cursed land and an animal who is slaughtered to cover Adam’s shame. Although sin is enacted by humanity, its consequences are creation-wide. As the Reformers were at pains to emphasise, sin is holistic.

Furthermore, God’s care for his creation following the Fall is never androcentric, even if humanity has a very special part to play. Animals completely outnumber humans on the Ark. Part of God’s provisions for protecting his creation from the fallen royal image are sabbath laws for the land and animals. The new creation is envisaged by Isaiah as shalom between land, humans and animals. In Job, humanity is seen as almost a bystander to the complexities of God’s creation. The world is portrayed as bewilderingly beyond human comprehension and, as Mao discovered, trying to rationalise it for human convenience is part of the dangerous hubris of human sin.

Moving into the New Testament, Biblical scholars and systematic theologians are reopening our eyes to the importance of the physicality of Christ. God loves matter so much that he eternally unites it to himself in Christ Jesus. It is not primarily spiritually but physically through which the powers of sin, death and Satan are defeated on the Cross (sin is condemned in the flesh) – though the spiritual consequences are manifold. And it is the physical body, not the disembodied soul, which is gloriously raised at Easter. Salvation is as much a physical thing as a spiritual one. This in turn raises interesting questions: as Jesus was fully human, 56% of the cells contained in his body would be bacterial. What happens to those in the resurrection? Are Mitochondria destroyed… or transfigured? Although such questions may be seen in a Pauline sense as foolish, they do prompt us to consider that the New Creation may be as intermeshed and interconnected as the old one – perhaps more so. And finally, what is at the centre of the New Jerusalem? A tree. Without a doubt, the non-human physicality of our intermeshed, interconnected creation is deeply precious to God.

We are seeing in real-time how human sin is having creation-wide consequences. As humanity relentlessly and sinfully consumes more of God’s earth’s resources without thought for God’s intended shalom, the planet shudders. It doesn’t take much imagination to realise that pumping approximately 390 billion tons of hot carbon into our atmosphere in just over a century whilst simultaneously cutting down a third of the world’s carbon-storing forests in the same period would cause problems! And now, as is the nature of our intermeshed and interconnected world, this global warming is gradually killing off the bacterial plankton in our oceans, which produce between 50% and 80% of our oxygen, and the bacteria in the soil, which cause our crops to grow. We are literally cursing the land. This is happening at alarming rates. I recently watched an interview with a climate scientist, who was asked if he was surprised at the number of mass fires and flooding that were taking place in the last few years. He said that climate scientists had predicted thirty years ago that we would be facing such conditions in the early 2020s – but few listened. More worryingly, he stated that the current situation is worse than the models predicted.

Turning away from the Enlightenment model of human separation and returning to a more Scripture-centric model of human intermeshing and interconnection with God’s created world will help break the habits that have caused the climate crisis. Too often, Christians have projected into Scripture the Gnostic idea that God will save us from creation, and therefore what we do to creation does not matter. Pentecostal theologian A.J. Swoboda, in his lecture to the 2021 Elim Conference, talked of a multi-million dollar shoddily-built church building which was being pulled down. When he asked why the congregation had spent so much money constructing such a shoddy building, he was told that they thought Jesus was returning soon, so they didn’t need to spend time on design! Such a mind-set stems from the idea that when Jesus returns, we will be dislodged and separated from the creation in which we are currently intermeshed and interconnected. But such an idea is certainly not Scriptural. Adam was commanded to till the garden, not trash it. As Paul perhaps hints in Romans, there is a sense in which us humans cannot be saved unless the groaning creation with which we are intermeshed is saved with us.

Joshua Penduck is Chair of Fulcrum