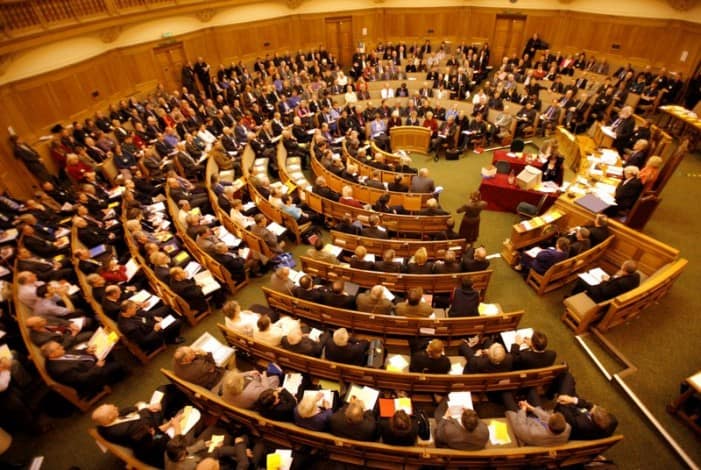 Systemic problems within the Church of England current governance and ‘culture’ issues in the House of Bishops’ meetings are fuelling calls for national governance reform according to a new report.

A paper published this week explains there is a ‘proliferation’ of statutory and non-statutory committees within the Church’s current governing structure‘many of which have no formal powers but develop policy and/or make decisions which then have to be formalised by the relevant statutory bodies’, with ‘no consistency between them’.

The paper cites examples of ‘systemic problems’ with the Church’s current national governance arrangements. It also reflects on the storm of outrage prompted by the House of Bishops’ 2020 Pastoral Statement’ on opposite sex civil partnerships in which a number of Bishops later denounced a statement they had signed up to.

It says that “poor communication and lack of clarity in delegation allowed a public statement to be made which caused great distress”.

It explains that “the situation arose in part because of the unusual and unclear remit of the House of Bishops in relation to the governing bodies”, explaining that the Statement had not been discussed with any of the governance bodies. It also says that “the atmosphere at such meetings contributed tothe problem assome participants felt unable to raise concerns at or between meetings,which begs questions about the culture that our current structures encourage”.

It also explains that the development of a series of Archbishops’ Commissions (which can be initiated without the engagement and endorsement of any of the current governance structures) has“caused some tension”.

The paper points out that “such commissions could be said to lack buy-in and the legitimacy which formal governance endorsement would give them. Nevertheless, they make recommendations which are then expected to be endorsed by the Church’s governance bodies”.

It also notes that there is confusion amongst bishops about the roles of bishops and about the relationship between them and other parts of the Church.

It points out that the fact that bishops are so strongly identified with location “potentially makes it more difficult for them to come to a collective, national view and/or be loyal to decisions taken in the national interest”.

Furthermore, it says that there is “a lack of clarity about how the Archbishops fit into the national governance structures and how far they are supposed to operate independently of them”.

The paper points out that the House of Bishops only includes approximately half the bishops of the Church of England, leaving approximately 64 bishops who are members of the College but not the House excluded from national policy.

It says that the House of Bishops is not best placed in governance terms or in terms of inclusiveness to occupy the role of quasi-governance body.

The paper explains that the role of Bishops in national governance to the role of the General Synod is “one of the most vexed and widely misunderstood aspects of national Church governance”.

It says that while the General Synod has a clear identity as a legislative body under the 1969 Synodical Government Measure there is no clarity about its oversight role of the National Church Institutions.

It points out that ‘the expression ’synodically-governed’ may have originated with the 1969 Measure, which created the General Synod in its current form, but the phrase is an unhelpful one as it supports what it calls “the widespread misconception in the media” that General Synod is the Church’s governing body.

It also explains that while there are “many gifted people serving on General Synod” the elected body also features a number of “campaigners” and is not socially, racially or demographically diverse.

The paper recommends that The Church of England should initiate a new piece of work to explore the reform of the General Synod and Synodical government more widely.

The main recommendation of the Governance Review Group is to reduce the number of the national governance entities by merging the oversight of most of the Church’s national activities into a single body with a Board of Trustees. The new body would combine activities of the Archbishops’ Council, Church of England Central Services, and the Archbishops’ offices at Lambeth Palace and Bishopthorpe.